Ukraine is very gradually but surely becoming energy efficient and independent of external energy supplies through the development of renewable energy sources. This was stated by the Chairman of the Board of the European-Ukrainian Energy Agency Mats Lundin, opening the 11th European-Ukrainian Energy Day – one of the most important events in the energy sector of Ukraine.

The basis for the discussion of this year’s conference was the future of Ukrainian energy, its prospects and development within the framework of the EU Green Deal. Topics were divided into four sharp panel discussions. As you know, the European Union has set itself an ambitious goal – to make Europe the world’s first climate-neutral continent by 2050. At the same time, one of the world’s priorities is the development of clean energy and pollution reduction.

Today in Ukraine 40% of electricity is used by buildings and construction, and 60% of natural gas is used by central heating systems and houses. According to Deputy Minister of Community and Territorial Development of Ukraine for European Integration Ihor Korkhovyi, within the framework of the policy of joining the European Green Deal, the ministry sets ambitious goals – to increase thermal modernization of buildings to 60% by 2050 and increase the share of renewable energy sources in heating systems to 50%. He also noted that a program worth 300 million euros is being discussed with the European Investment Bank for the thermal modernization of public buildings – schools and kindergartens in the cities of Ukraine.

The head of the EU Delegation to Ukraine Matti Maasikas noted Ukraine’s interest in joining the Green Deal. Mr. Maasikas expressed concern that the draft state budget of Ukraine for 2021 does not include funds for energy efficiency, but instead has funds to support the coal industry in the amount of 3 billion hryvnias. According to him, this contradicts the statements about the “Green Deal” and does not meet Ukraine’s obligations to jointly finance energy efficiency. Jean-Eric de Zagon, Head of the Permanent Representation in Ukraine of the European Investment Bank, also drew attention to the breach of Ukraine’s commitments to the EU and Germany on joint financing of energy efficiency and expressed hope that this would be corrected. He called the Energy Efficiency Fund created by Ukraine, Germany and the World Bank a success story. Today, more than 17,000 Ukrainian families participate in its programs, and this number continues to grow.

Acting Minister of Energy Olha Buslavets stressed that in addition to the Energy Efficiency Fund, Ukraine has a program of “warm loans” for the population. This year, the amount of investment under this program amounted to UAH 1 billion and the ministry is working to extend the program of “warm loans” for another year as a socially oriented and quite positive and effective program.

George Cristodorescu, Coordinator of the Energy Efficiency Sector and Director of the Project “Energy Eciency Reforms in Ukraine” implemented by GIZ, noted that the project is working on and developing a concept for abandoning the coal industry and coal generation. According to him, he hopes that the German ministers of economy and energy will help implement this concept in two regions of Ukraine.

However, RES investors are uncertain about the further implementation of policies aimed at energy efficiency and support for the development of renewable energy sources in Ukraine. They unanimously draw attention to the sensitivity of the situation after the Memorandum between the state and investors and the subsequent adoption of the relevant law and the inadmissibility of the state’s failure to fulfill its obligations. Yuriy Kubrushko, EUEA Board Member, managing partner of IMEPOWER, noted that payments for electricity provided did not reach the state-guaranteed 100%, 60% payments in August, but are higher than 10% of the amount of payments in January. According to Māris Kunickis, CEO of DTEK Renewables, it is likely that by the end of the year the state will not find the money to make payments at the level of a guaranteed 100% to the RES industry. Sergiy Makhin, senior portfolio manager of VR Capital Group, notes that this state of settlements is a constant obstacle to further investment, without which the development of the industry is impossible.

Oleksandra Gumeniuk, Director of the European-Ukrainian Energy Agency, noted the prospects for the positive development of the sustainable energy-efficient infrastructure sector, as new initiatives for energy-efficient buildings in Ukraine are constantly emerging in Ukraine. In particular, Ms. Gumeniuk demonstrated the possibilities of cooperation between participants – developers, banks, a certifying company, which confirms the class of energy consumption and owners of energy-efficient housing, and as a result of such cooperation, the homeowner’s monthly maintenance costs are reduced by almost a quarter. Olaf Zimelka, Director of KfW Eastern Europe, the Caucasus and Central Asia and Chairman of the Board of the Green for Growth Fund, also stressed the need to improve energy efficiency in general due to the growth of financial literacy. He called one of the challenges in Ukraine the urgent need to develop electrical infrastructure, which should provide easy access to electricity networks.

The European-Ukrainian Energy Day is a traditional platform for political dialogue between participants in the field of renewable energy and energy efficiency with government officials and international organizations, communication between experts and market participants. Energy Day annually brings together a quality international community, provides a constructive discussion and understanding of the vector of movement and clear necessary steps for industry participants for next year.

The European-Ukrainian Energy Agency (EUEA) brings together well-known international and national Ukrainian investors with a total investment of over 3.5 billion Euros  in the renewable energy sector in Ukraine for the construction of power plants with a total capacity of over 2.7 GW from renewable sources such as sun, wind and biomass.

Comments from Energy Day’s participants, as well as a recording of all four panel discussions can be found on the EUEA page: https://www.facebook.com/EUEA.UA/ 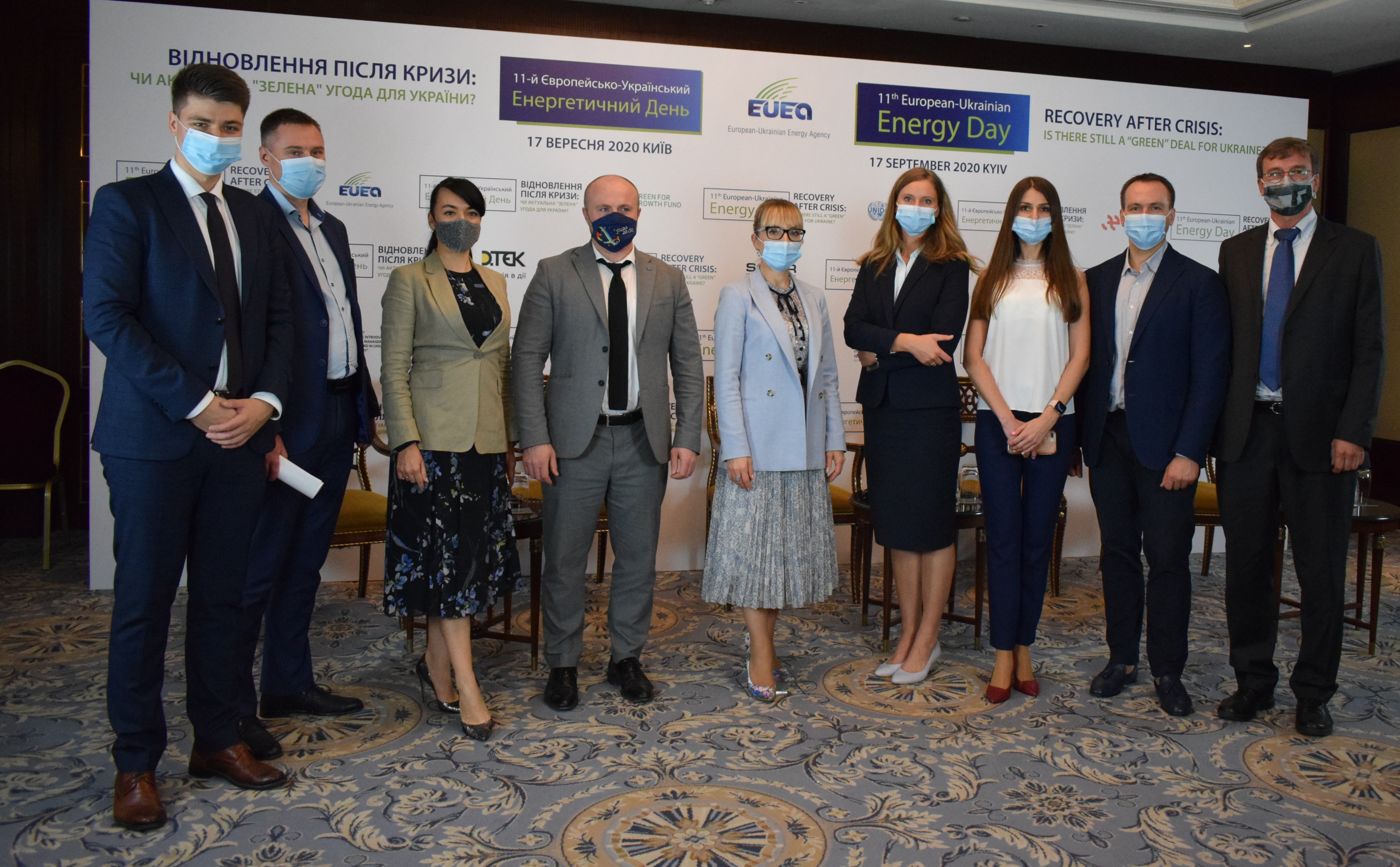 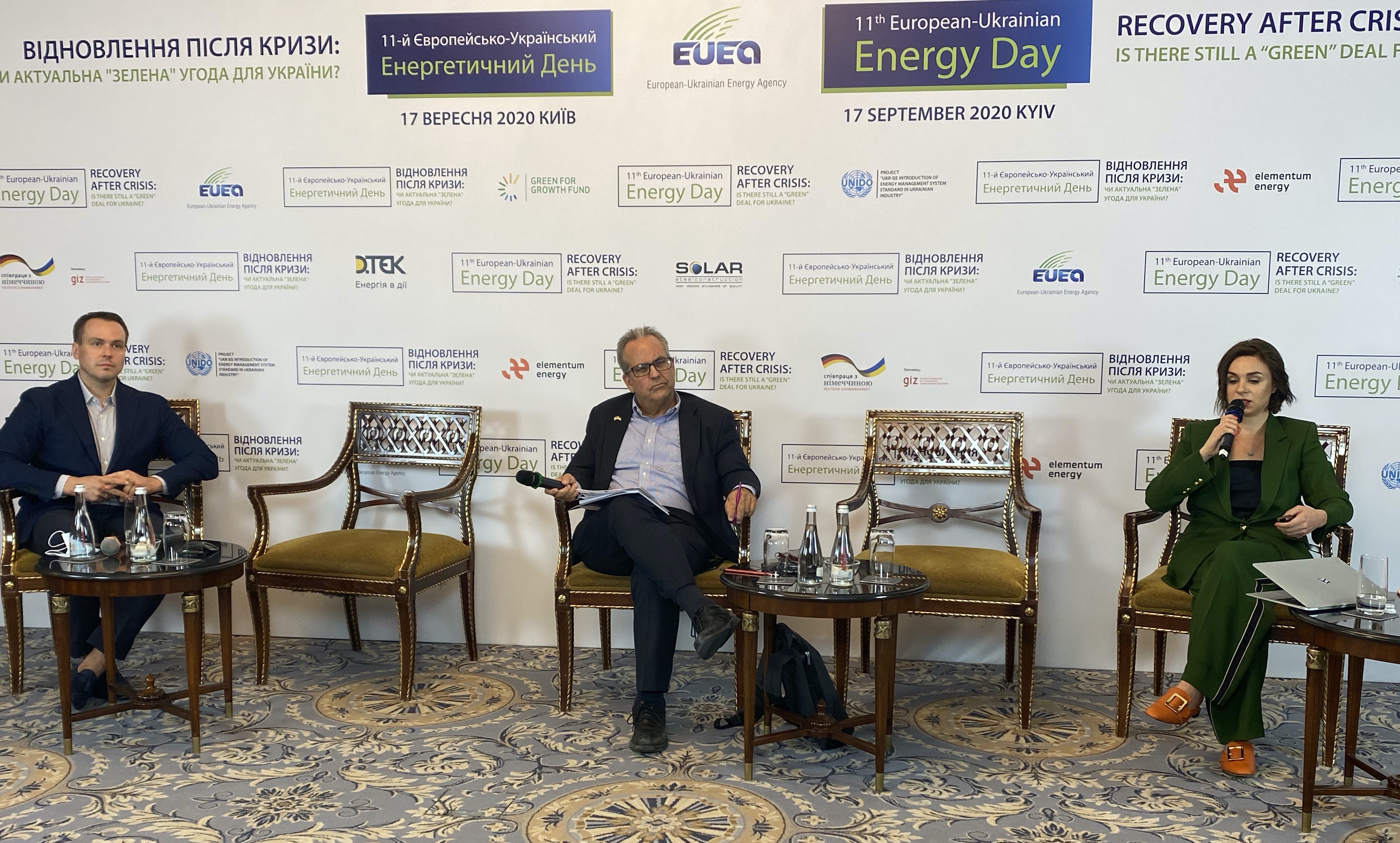 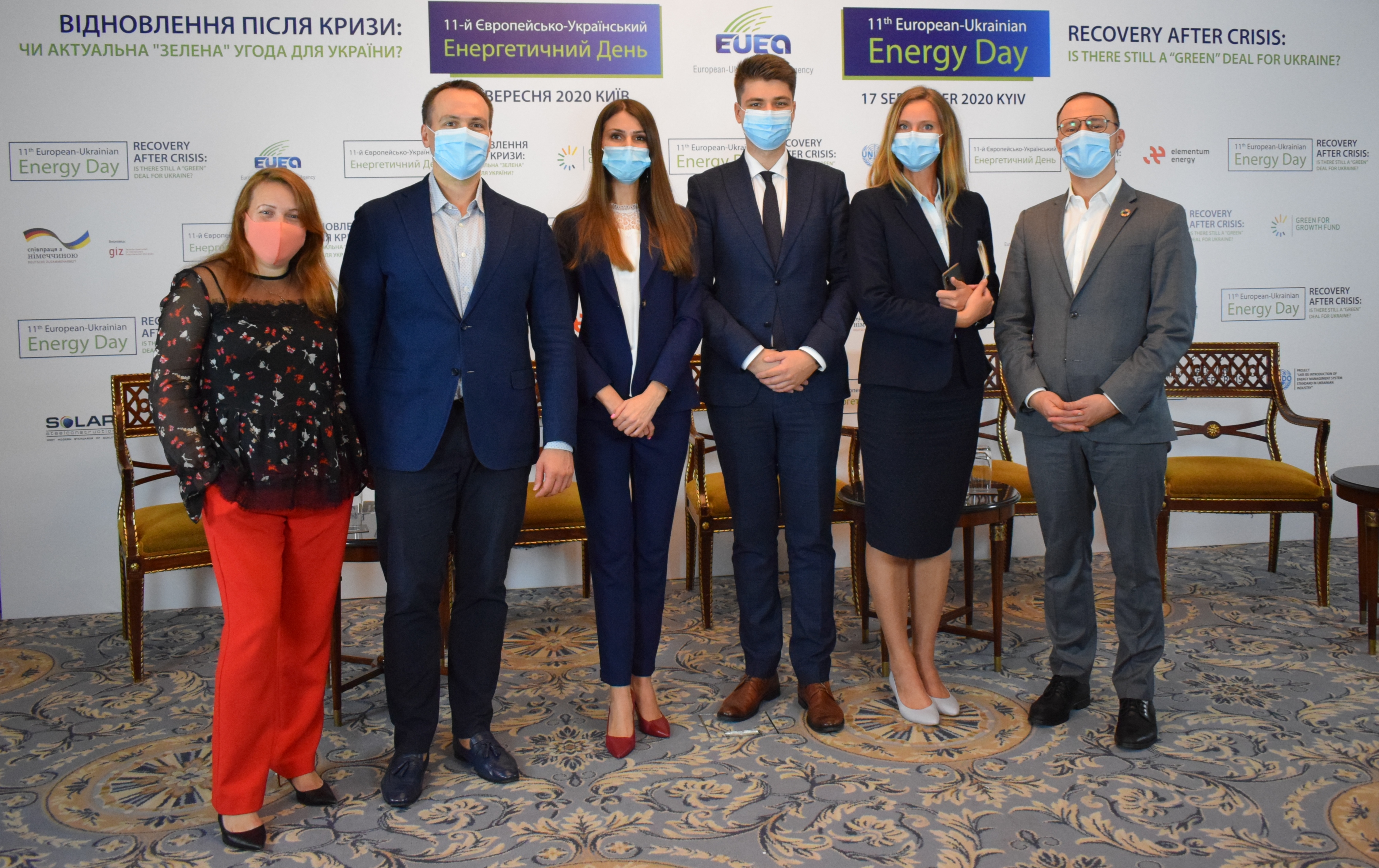 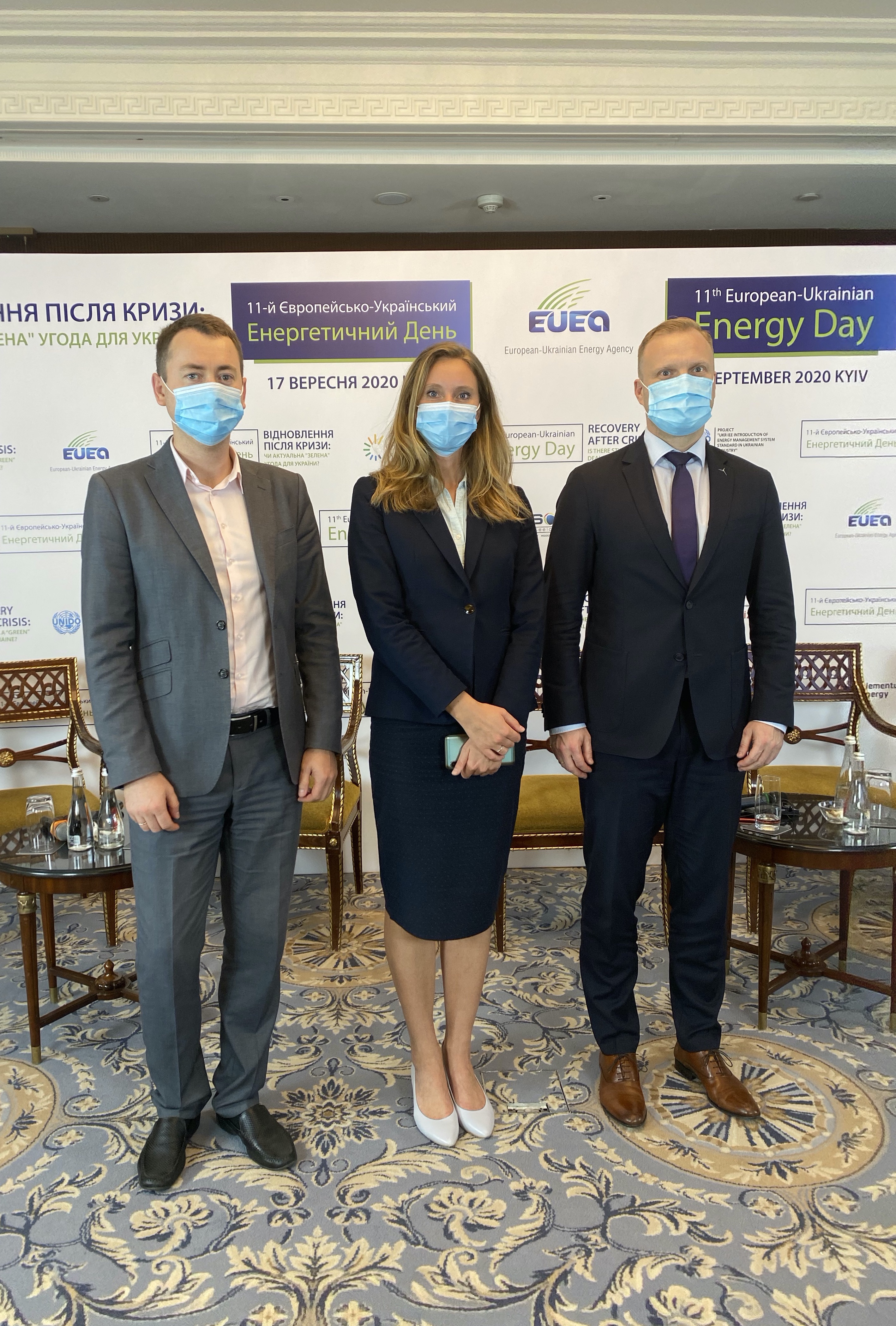 GreenHomes.Solutions Platform from the SMARTER initiative

EUEA, UWEA and UARE sent a joint letter to the President of Ukraine

A letter from Dirk Buschle, the Chairman of Energy Community Secretariat Dispute Resolution and Negotiation Centre to the NEURC

EUEA together with leading RES associations appealed to the NEURC